Hey guys! For you out there who are fans of the Tempest series from Julie Cross, of course you knew that the last book of the series, Timestorm, came out last January 28!
Anyway, I am so happy to be part of the blog tour, hosted by The Fantastic Flying Book Club.
Below, I have a Q&A with Julie Cross, the author. And then! there’s a giveaway.
Before I forget, My #QOD is
“What is the name of the group of time travelers in this book series?”
A little reminder from the FFBC team,  #FFBC giveaways are decided not by chance, but by # of Entries. They award the giveaways to those who have the most entry points. So it pays to tweet each day and answer the daily #QOD on the participating blogs. 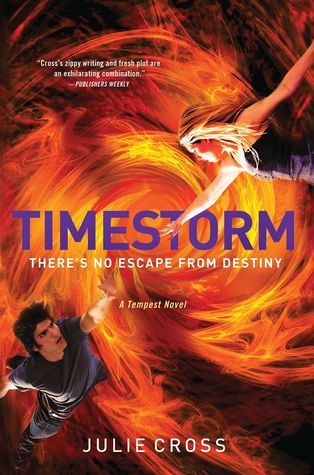 The battle between the Tempest division and Eyewall comes to a shocking conclusion in this final installment of the Tempest trilogy, where the need for survival stretches the boundaries of history, both past and future, and the world Jackson once knew is a place forever marked by the detrimental effects of time travel.

As Jackson recovers from his brush with death, he’s surrounded not only by the people he loves most—his dad, Courtney, and Holly—he’s also amongst a few of the original time travelers. As he learns more about their life and how this world began, it becomes apparent that they need to put a stop to Thomas and Doctor Ludwig’s experimenting at Eyewall Headquarters. What starts out as an escape plan becomes a war between time and humanity, between freewill and peace. It’s the battle Jackson was born to fight and he’s not about to back down. Not for anything. Not for anyone. 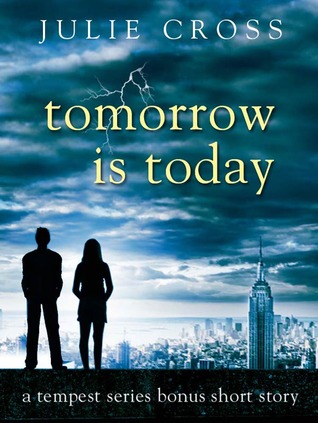 How long did it take you to finish plotting for Timestorm? (Compared to Tempest and Vortex ?)

After I finished the first draft of Tempest, I actually plotted out the rest of the series. I didn’t know exactly where Vortex would end and where Timestorm would begin until I finished Vortex so it was a combination plotting effort between the 2nd and 3rd books. With Tempest, I didn’t plot at all. I just wrote it.

Random question: if you were to rename the main characters’ names, what would they be? 🙂

I don’t think I could do that. I know that’s a boring answer but I’m so attached to Jackson and Holly’s names.

I haven’t read Timestorm yet, if you’re willing to cheat up some spoiler line, what would it be? 🙂

What is the most exciting thing we should look after in this book trilogy ender?

There are many exciting parts to Timestorm, but I’d say the above mentioned Maelstrom is where the excitement hits it’s peak for sure.

What’s next for Julie Cross?

I have a New Adult contemporary novel, THIRD DEGREE, releasing March 25, 2014. Then I have a YA sports-themed contemporary coming out October 7, 2014. And either December or January (not officially scheduled yet) the NA/YA crossover co-authored book, HALFWAY PERFECT releases. I wrote HALFWAY PERFECT with Mark Perini who is the model portraying Jackson on all the Tempest series covers.

It’s so exciting to see a collaboration between Mark Perini and Julie! Can’t wait to read their upcoming book. 🙂

I’m the author of the YA sci-fi trilogy, the Tempest series (St. Martin’s Press). I’m also the author of the YA contemporary novel, Letters To Nowhere.
But even more importantly than the above, I’m a fan of books and an avid reader/reviewer. Keep in mind, however, that a review is just one person’s opinion, one perspective. My goal is to show as much bias in my reviews as possible because this makes it easier for you to decide if your perspective is similar to mine or different. Everyone’s tastes are different. I like books with emotion and believability. I don’t mind edgy and heavy themes. I also like humor and quirk. I like weird characters in odd situations.
I have low tolerance for insta-love, flowery sex scenes, or mushy declarations of feelings. Not a fan of possessive/controlling male characters who get the girl in the end. When I recommend books, I always ask about favorite current reads and cater to each person’s taste.
I believe every book plays an important role whether I love it or hate, it’s having an effect on society. It’s changing, shaping, and molding the future of publishing. Regardless of my feelings about a book, I value the author’s time and effort put into creating their work. I only rate books available for purchase (or soon-to-be available) and consider those books as published works and their creators as professionals in their field therefore I treat them as professionals, giving my honest opinion on the work itself and not the person producing it.
If I rate a book and don’t provide any written review and you’d like to hear my thoughts, feel free to comment on the review and if I can, I’ll explain my reasoning behind the rating. I don’t mind authors commenting on any review I post – negative or positive. Also happy to email to discuss Juliecrossauthor (at) gmail (dot) com please alert me if I misled readers or given false information (accidentally of course) and I’ll correct the situation as soon as possible.