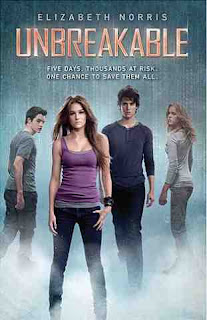 Four months after Ben disappeared through the portal to his home universe, Janelle believes she’ll never see him again. Her world is still devastated, but life is finally starting to resume some kind of normalcy. Until Interverse Agent Taylor Barclay shows up. Somebody from an alternate universe is running a human trafficking ring, kidnapping people and selling them on different Earths—and Ben is the prime suspect. Now his family has been imprisoned and will be executed if Ben doesn’t turn himself over within five days.
And when Janelle learns that someone she cares about—someone from her own world—has become one of the missing, she knows that she has to help Barclay, regardless of the danger. Now Janelle has five days to track down the real culprit. Five days to locate the missing people before they’re lost forever. Five days to reunite with the boy who stole her heart. But as the clues begin to add up, Janelle realizes that she’s in way over her head—and that she may not have known Ben as well as she thought. Can she uncover the truth before everyone she cares about is killed?(goodreads)

After so many days and nights of barely reading this book a day, I’m finally finished. Done. Wow. I’m not much of a scifi/investigative fan before, I watched few episodes of some related tv series, but that was it. But when I read Unraveling last year, I got hooked by Norris.
What’s much more intriguing in Unbreakable is the no-holds barred gruesome technicalities in describing each fight scene. And how deliberating each investigation and how extreme each course of action does. Though it burdened me that there were some significant loss of characters, but how the story turned out is just so amazing and well constructed. Every path the story was planned and clearly organized and well thought. Every aspect was taken into consideration too. I think it was somehow unfair if there were no liabilities in the story.
And just like Unraveling, the book has great characters, given that they came from the first one. Janelle, Ben, Barclay, Elijah, Cecily and Struz. Unbreakable doubled their important roles here. Janelle and Struz’s short partnership was actually great and it makes sense why you need a partner when working with an agency such as the IA or even the FBI. I love how driven and how brave our characters are. And there’s even some romance mixed on it. Just, wow. It’s packed I can assure you.
And now I’m left with an inkling to watch X files or something.

[Cover Reveal and Giveaway] A Missing Peace by Beth Fred