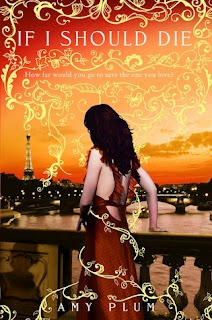 Title: If I Should Die
Series: Die For Me#3
Author: Amy Plum
Publisher: HarperTeen
Published: May 7, 2013
Source: publisher

I will not lose another person I love. I will not let history repeat itself.
Vincent waited lifetimes to find me, but in an instant our future together was shattered. He was betrayed by someone we both called a friend, and I lost him. Now our enemy is determined to rule over France’s immortals, and willing to wage a war to get what they want.
It shouldn’t be possible, none of it should be, but this is my reality. I know Vincent is somewhere out there, I know he’s not completely gone, and I will do anything to save him.
After what we’ve already fought to achieve, a life without Vincent is unimaginable. He once swore to avoid dying—to go against his nature and forsake sacrificing himself for others—so that we could be together. How can I not risk everything to bring my love back to me?

Done done done! Finished! The end. I have so many mixed emotions swirling inside me right now. Mostly happiness and gratefulness to having the chance to read and be a fan of this series ever since Until i Die came out last May 2011. I am proud to say its one of the series that I’ve watched out for since before it was published.

The story of the series in itself drew me to reading it. I have never read anything of it ever before. It’s unique, refreshing and just plain exciting. Though some might brand this with zombie-esque theme, but really it’s not. I like how chivalrous the main theme of the story is. Revenants. Saving the world one person at a time. It’s comic-passable, meaning like Superman kind of heroes exist. Except when they die, they reanimate again. It’s an amazing concept if you really think about it.

If I Should Die is an epic conclusion to a very thrilling and torturous series. The events that transpired were obviously carefully crafted. I’ve known all along of the main twist that happened in the middle of the story, but reading that part and confirming my suspicions and wild guesses just made me grin maniacally, haha! I appreciated Amy Plum’s execution of the order of events that has transpired. From dealing with one problem at a time. Through this, I did not even feel the slightest stressed with the happenings.

It started where Until I Die left off, and boy I couldn’t describe in words how hanging the cliff hanger was from the end of The second book. I’m so glad it picked right off at the start and immediately we can see a solution to the problem at hand in sight. And for the other dilemmas that followed afterwards too!

Though much has been answered in the series ender, but more are still, let me just say “in the process of” and the fate of which they have we don’t yet know. But! Take heart for there were hints prior that there may be solutions for it. And for the best and maybe scary part too, we don’t know what the future holds, it’s like a clean blank slate and anything can happen. But hey, isn’t this what reality is? I’m just happy they all got their happy endings, but essentially there were some mourninga in there too. But the resolution to all this is adjustments and acceptance, eh? Lastly and most importantly, I love how self-sacrifice and saving others and love everyone and put others before you and giving second chances are keys to the story. It’s positive and one I very much agree on. Makes me very happy.

Lastly, the love story between Vincent and Kate, though fiction, just proves and gives me hope that such love really exists. And boy do Vincent’s terms of endearment also make me tremble in fits of giggling. Words such as “mon ange” and “mon amour” will never be the same for me.

Kudos to Amy for a wonderful book series! I hope to hear more from Jules though 🙂3>