Hi guys! Today, we have a tour stop for the Paradox blog tour, hosted by Rockstar Book Tours. I’m the last stop for week one of the tour..so that’s something I guess..
I’m so excited to have with us today the author of Paradox, AJ Paquette, to answer some of my questions. 🙂 Read along below the blurb of the book, the interview (of course), and don’t forget to enter the giveaway! 🙂

Hi AJ! Welcome to Coffee, Books and Me!
Thank you for having me—I’m excited to be here and chat with you today!
When did you first realize you wanted to write a book?
I was one of “those kids” growing up who was always reading or writing some thing or another. However, I didn’t really get serious about writing with an eye toward publication until about 10 years ago. From that point on there were plenty of false starts, aborted attempts, and general doggie-paddling on the way to eventually holding this finished book in my hands. It’s been quite a journey! I should also add that while PARADOX is my first YA novel, I have also published several picture books, as well as a younger teen novel, NOWHERE GIRL, about an American girl born in a Thai prison trying to unravel the mystery of her mother’s past.
So how did “Paradox” first come into your mind? Was it in a dream or…?
It wasn’t exactly a dream, but the idea first came to me upon waking up from one of those leisurely weekend naps (which happen so rarely but which are so pleasant when they do!). I awoke with this very vivid character in my mind—a stubborn, determined, wounded girl, who wakes up in a rocket ship on an alien planet with no memory of her past, or knowledge of her present location, or idea what it is she needs to do—only that she must do it now. From there, the plot grew and thickened, growing more tense and exciting to me as I went along!
ooh. interesting! I also have those kinds of naps or dreams where the story is just so interesting and must be written down. But life gets in the way so I can’t just put them into writing yet…Anyway…
What is the “key” in creating a fiction alien planet/world?
I don’t know if there’s any one key, but one thing’s for sure is that there are no shortcuts! I had a lot of fun writing this novel, but with character and plot issues aside, there was a lot of research needed to make sure everything came together logically. The planet Paradox, for example, has a binary solar system. Over the course of Ana’s journey the suns move across the sky and it was very important to me to render this process as accurately as possible. I was lucky enough to be able to speak with a scientist who actually specialized in binary star systems—needless to say, my solar descriptions needed some major adjustments from the first writing! Likewise, for the development of the brain disease that plays a big part in the story, I spoke with and received feedback from quite a number of different scientists and experts of the subject. My disease is entirely fictional, but its foundation is as strong as I was able to make it given the unusual parameters and the science-forward state of the story.
Who is the author, that you can really say, is your inspiration to become one too?
I don’t know if I can pin this down quite that specifically, but two of my favorite authors growing up were Tamora Pierce and Madeleine L’Engle. They remain inspirations to this day!
Lastly, what is the one thing that we should look forward to in “Paradox”?
One of my favorite things in writing PARADOX was the way the story dimensions change as the book progresses. There are some pretty cool surprises and plots twists as you go along! There is also a LOT going on—it’s really like a giant puzzle at first—but the further you read, the more things begin to make sense. It was satisfying for me as an author (and yes, I’ll admit it—challenging, as well!) to go back and make sure that all the pieces fit together, all the layers meshed, and the logic added up. So what can readers look forward to in PARADOX? One heck of a wild ride!
Thanks for answering my questions!
You may now check out the book’s blurb! 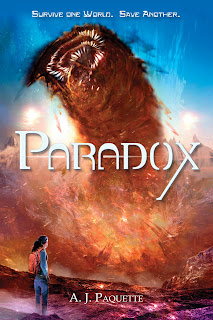 Ana only knows her name because of the tag she finds pinned to her jumpsuit. Waking in the featureless compartment of a rocket ship, she opens the hatch to discover that she has landed on a barren alien world. Instructions in her pocket tell her to observe and to survive, no doubt with help from the wicked-looking knives she carries on her belt. But to what purpose?Meeting up with three other teens–one boy seems strangely familiar–Ana treks across the inhospitable landscape, occasionally encountering odd twists of light that carry glimpses of people back on Earth. They’re working on some sort of problem, and the situation is critical. What is the connection between Ana’s mission on this planet and the crisis back on Earth, and how is she supposed to figure out the answer when she can’t remember anything?

A.J. Paquette has been writing stories since early childhood. She and her sister would spend hours creating masterpieces of stapled paper and handwritten words, complete with pen-and-ink covers and boxed illustrations.
The road to publication was long and winding, peppered with many small successes including: a variety of national magazine publications, being a 2005 PEN New England Susan P. Bloom Discovery Award honoree, and receiving the 2008 SCBWI’s Susan Landers Glass Scholarship Award, for the book that would later become Nowhere Girl. Her first picture book, The Tiptoe Guide to Tracking Fairies, was published in 2009.
She now lives with her husband and two daughters in the Boston area, where she continues to write books for children and young adults. She is also an agent with the Erin Murphy Literary Agency.
WEBSITE | TWITTER
Website: http://www.ajpaquette.com/
Twitter: https://twitter.com/joanpaq

An ARC of PARADOX to THREE winners. (US/Canada).
sponsored by the tour 🙂
a Rafflecopter giveaway
Please like & share:

One response to “AJ Paquette’s Paradox Blog tour with giveaway!”