Hi guys!
I am so excited to be a part of Nichole Giles’ Descendant blog tour. For today’s tour stop, we have so
many stuffs for you to see!
Check out the guest post of Nichole Giles, a character sketch of the MC Abigail Johnson.
And then there’s an excerpt and giveaway!
How cool is that?
enjoy! 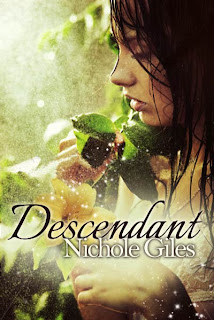 Seventeen-year-old Abigail Johnson is Gifted.
Blessed-or cursed-with Sight and Healing, Abby lives an unsettled life, moving from place to place and staying one step ahead of the darkness that hunts her. When she arrives in Jackson, Wyoming, she is desperate to maintain the illusion of normalcy, but she is plagued with visions of past lives mixed with frightening glimpses of her future. Then she meets Kye, a mysterious boy who seems so achingly familiar that Abby is drawn to him like he’s a missing piece of her own soul.
Before Abby can discover the reason for her feelings toward Kye, the darkness catches up to her and she is forced to flee again. But this time she’s not just running. She is fighting back with Kye at her side, and it’s not only Abby’s life at stake.

Character Sketch: Abby Johnson
I think one of the hard things about being an author is telling my character’s secrets. It kind of feels like I’ve read my daughter’s journal and blogged about it, and I would never do that. And yet, here I am, telling you everything you never knew about Abby.
First off, I named her Abby because I am long-past done having children, but Abby has always been on my list of favorite names . Originally, I toyed with two or three others, but none of them felt right. This was the one that stuck. Also, if you look it up, among other definitions, the name Abigail means “gives joy.” And that really is one of Abby’s most important goals in life.
Having such an unsettled childhood, Abby hasn’t really known a lot of joy outside her family and dog, so she tries hard to make sure to spread joy to others as much as she can. She has inherited this amazing ability to heal people, and that ability comes with an over abundance of compassion. The problem is that Abby’s compassion feeds her desire to fix everything broken and heal every hurt, and that is exactly the kind of thing her grandmother has been warning her against for Abby’s whole life.
She has another ability as well. It’s sort of a psychic sight, where she has visions of things that don’t really make a lot of sense as bits and pieces, but that start to fit together as she has more and more of them.  Unfortunately, solving the puzzle doesn’t necessarily fix the mess she’s in when the last piece falls into place.
When she meets Kye, and they connect immediately, it’s easy for her to open up and spill the secrets she’s kept her whole life—and that’s probably the scariest thing she’s ever experienced. Until she thinks of being separated from Kye, and then that’s even scarier. The minute they meet, Abby pretty much starts experiencing every scary thing she could ever imagine, and then some, but somehow, she holds herself together and finds wells of extraordinary strength when she needs them the very most.
I wanted her to be this identifiable character who is highly compassionate, sometimes to a fault, specifically because of her healing nature. If she could, Abby would do whatever it took to heal the world—unless she had to choose between the world and someone she loves. Then…it’s a tough call.

Loading…
About Nichole Giles:
Nichole Giles was born in Nevada, and moved with her parents to a number of cities in and around the West. Writing is her passion, but she also loves to spend time with her husband and four children, travel to tropical and exotic destinations, drive in the rain with the convertible top down, and play music at full volume so she can sing along.
Please like & share: