Hi guys! Today, we are On Tour with Prism Book Tours…for the Daynight blog tour by megan Thomason.
Below,you’ll find a special guest post from the author, some awesome graphics and lots of GIVEAWAYS! 🙂

It’s time to leave Earth and cross over to the other side… it’s not as far away as you think!! 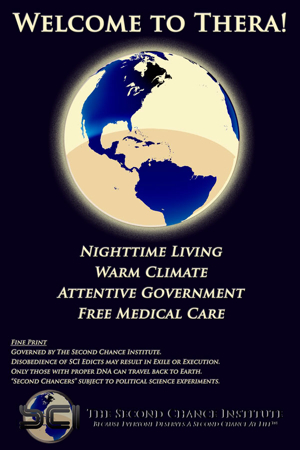 The idea for Thera came to me as I was hiking the canyons of San Diego on a particularly hot day. I ruminated about what it would be like to live in a place so hot that days and nights had to be switched. From there, I thought, what if everything was switched? Thera quickly became the inverse of Earth and the SCI became the apropos “ruler of the night.”
When creating a new world there are so many things that have to be thought through: name, citizens, geography, climate, history, technology, culture, social structure, government, politics, commerce, flora/fauna, and transportation to name a few.
Every decision has an impact. For instance, by changing days and nights I realized that Earthly vernacular didn’t apply. Why would they say Monday when the focus isn’t on days? I had to adapt all the lingo to be Monnight, Tuesnight, etc.; daygowns instead of nightgowns; daymares instead of nightmares. It’s these kinds of details that help readers buy into the world and feel like they’re there right alongside the characters.
Research is a critical component of world-building. To make things realistic, an author needs to know what they’re talking about. If I make Thera the inverse of Earth there will be a whole lot less water on Thera. This will greatly impact the climate, weather, flora/fauna, and what kind of technology they need to survive (water collection; desalination plants, etc.). Even if these kinds of things aren’t elaborately discussed in the book, the author needs to understand how it all works so that the details mentioned seem authentic and believable. Megan Thomason lives in paradise aka San Diego, CA with her husband and five children. A former software manager, Megan vastly prefers writing twisted tales to business, product, and marketing plans. When she isn’t typing away on her laptop, she’s reading books on her phone—over 600 in the last year—or attending to the needs of her family. Megan’s fluent in sarcasm, could potentially benefit from a 12-step program for road rage, struggles with a Hot Tamales addiction, loves world travel & fast cars and hates paperwork & being an insomniac. Daynight is Megan’s first published novel, but fourth written one. Introducing…  the new Novella:  FREE for the Tour!

Meet The Second Chance Institute (SCI): Worldwide non-profit and do-gooder organization. Their motto: Because Everyone Deserves a Second Chance at Life(TM). Reality: hidden behind every kind act is a dark agenda designed to gain control and force societal and moral extremes. Currently, the SCI’s pushing Project Liberate, a program to woo the poor and downtrodden into their Clean Slate Complexes—where “everything is provided” from jobs to food, shelter, clothing, and education. Unfortunately, as with all things that sound too good to be true, there’s a catch…
Meet Alexa Knight. Feisty, tough and currently homeless in Los Angeles, Alexa agrees to help the SCI in return for medical care for her sick mother. When she starts to suspect there’s more to the SCI than meets the eye will she believe Adam—the boy who saved her life and the SCI’s biggest champion, or Joshua—the attractive enigma who sings about conspiracy theories and pretends to be someone he’s not?
Full of action, humor, romance, twists and turns, clean slate complex is a companion story to the highly-praised dystopian novel, daynight. It can be enjoyed before or after readingdaynight.
LINK: http://www.amazon.com/dp/B00CFQY0JY

We have DAILY giveaways and a GRAND FINALE giveaway.
For the next fourteen days, there will be different giveaways for each blog, and for Coffee, Books and Me, it’s a heart rate monitor.
Check out more details below: 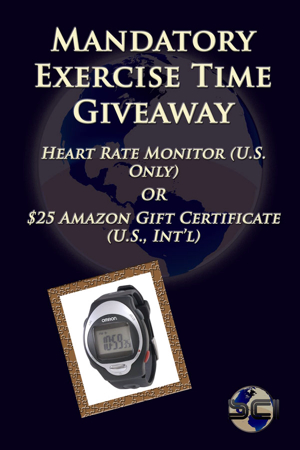 Daynight Second Chances Giveaway:
Choose what you enter to win wisely. Your stay on Thera may be extended indefinitely. 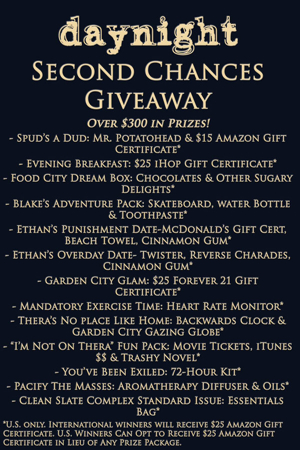 Highlighting a different giveaway every daynight of the Tour… International Winners will receive a $25 Amazon Gift Certificate and US Winners may choose $25 GC in lieu of Prize Package.

US only. International winners will receive $25 Amazon gift certificate. US winners can opt to receive $25 Amazon gift certificate in lieu of any prize package.Open only to those who can legally enter. Winning Entry will be verified prior to prize being awarded. No purchase necessary. You must be 18 or older to enter or have your parent enter for you. The winner will be chosen by Rafflecopter and announced on Rafflecopter and Grand Finale posts as well as emailed and the winner will have 48 hours to respond or a new winner will be chosen. This giveaway is in no way associated with Facebook, Twitter, Rafflecopter or any other entity unless otherwise specified. The number of eligible entries received determines the odds of winning. Giveaway was organized by Burgandy Ice @ Colorimetry and Prism Book Tours and sponsored by Megan Thomason. VOID WHERE PROHIBITED BY LAW.

CHECK OUT THE TOUR SCHEDULE
Become an SCI Recruit

Snuggling on the Sofa – Review

– My Passion for Books – Review; Ethan

– Getting Your Read On – Review