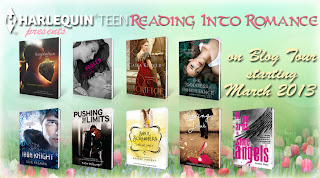 HarlequinTEEN’s spring Reading into Romance
Spring is in the air and HarlequinTEEN wants you to fall in love! And they have just the books to make that happen!
In this epic tour, we’ll be featuring 9 authors and their amazing, toe-curlingly romantic books!
Today, the blog is featuring The Goddess Test series by Aimee Carter. I loved that series and I have all sorts of respect and adoration to Kate and especially Henry (characters in the series). 🙂
By the way, the tour is hosted by the wonderful Danny and Heather from KismetBT, and the books are from HarlequinTeen 🙂
Okay! so, check out the blurbs below, an exclusive guest post from the author Aimee Carter, plus don’t forget to enter the oh-so-awesome giveaway!
The Importance of Love Triangles and Choices
Aimée Carter (@aimee_carter)
www.aimeecarter.com
These days, it seems like love triangles are everywhere, especially in YA. There are a ton of variations: you have your basic triangle, where she’s in love with two very different (but quality) guys and can’t choose between them. Then you have the triangles where the heroine tries to choose between the good guy who might be a little boring, and the bad boy who takes her breath away. Or she has to choose between a long-time friend and a hot new love interest, or two brothers, or any variation between.
Either way, no matter how you might personally feel about love triangles (and whether or not they’re overdone), there’s plenty of variety out there. Why are they so popular? Stephenie Meyer and the insanely popular Twilight series have a lot to do with it, I suspect, but at the same time, a love triangle represents a decision for the heroine to make, one that mirrors the choices a lot of teenagers are faced with: where they want to live after high school, which careers they want to pursue, which colleges to go to, and even whether or not to go to college at all. A few decisions can equal your entire future, and it’s scary – and similar to what YA heroines go through as well.
For a heroine, it isn’t always just a choice between two guys. It’s a choice between the two futures they represent as well. Sometimes they’re two relatively similar, happy futures. Sometimes they represent two different schools the heroine might attend. But sometimes they’re more radical – sometimes they represent two completely different lives, and the heroine must choose which one she wants to live. With one boy, she might be a pampered princess who lives far away from her family and all she’s known, and with another, she might have to work hard for the rest of her life, but at least she has guaranteed happiness. The path she chooses may even say more about what she values as a character rather than which boy she happens to love more.
Your choices say a lot about what you value and who you are as a person. But they’re still your choices, and just like the heroine must make a choice between which boy and future she wants, so do we all at some point in our lives. Choices are scary, and change can be scary, but in the end, listen to your head and follow your heart, and you can’t go wrong. 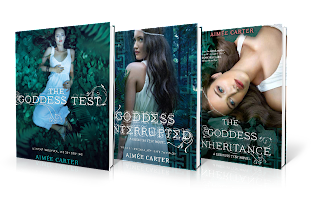 About The Goddess Test – Goodreads,  Amazon, B&N ,  The Book Depository
Every girl who had taken the test has died.Now it’s Kate’s turn.It’s always been just Kate and her mom – and her mother is dying. Her last wish? To move back to her childhood home. So Kate’s going to start at a new school with no friends, no other family and the fear that her mother won’t live past the fall.Then she meets Henry. Dark. Tortured. And mesmerizing. He claims to be Hades, god of the Underworld – and if she accepts his bargain, he’ll keep her mother alive while Kate tries to pass seven tests.Kate is sure he’s crazy – until she sees him bring a girl back from the dead. Now saving her mother seems crazily possible. If she succeeds, she’ll become Henry’s future bride and a goddess.If she fails…

About  Goddess Interrupted – Goodreads, Amazon, B&N , The Book Depository
Kate Winters has won immortality.
But if she wants a life with Henry in the Underworld, she’ll have to fight for it.
Becoming immortal wasn’t supposed to be the easy part. Though Kate is about to be crowned Queen of the Underworld, she’s as isolated as ever. And despite her growing love for Henry, ruler of the Underworld, he’s becoming ever more distant and secretive. Then, in the midst of Kate’s coronation, Henry is abducted by the only being powerful enough to kill him: the King of the Titans.
As the other gods prepare for a war that could end them all, it is up to Kate to save Henry from the depths of Tartarus. But in order to navigate the endless caverns of the Underworld, Kate must enlist the help of the one person who is the greatest threat to her future.
Henry’s first wife, Persephone.

About The Goddess Inheritance – Goodreads, Amazon, B&N, The Book Depository
Love or life.
Henry or their child.
The end of her family or the end of the world.
Kate must choose.
During nine months of captivity, Kate Winters has survived a jealous goddess, a vengeful Titan and a pregnancy she never asked for. Now the Queen of the Gods wants her unborn child, and Kate can’t stop her–until Cronus offers a deal.In exchange for her loyalty and devotion, the King of the Titans will spare humanity and let Kate keep her child. Yet even if Kate agrees, he’ll destroy Henry, her mother and the rest of the council. And if she refuses, Cronus will tear the world apart until every last god and mortal is dead.With the fate of everyone she loves resting on her shoulders, Kate must do the impossible: find a way to defeat the most powerful being in existence, even if it costs her everything.
Even if it costs her eternity.

GIVEAWAY TIME!
You can enter to TWO giveaways!
The first is for the chance win your choice of a book from The Goddess Test Series!  The second is a Romantic Grand Prize Package 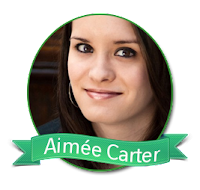 Aimée Carter was born and raised in Michigan, where she currently resides. She started writing at age eleven and later attended the University of Michigan, graduating with a degree in screen arts and cultures. Currently she spends her time continuing with The Goddess Test series and working on new projects. You can tweet her at @aimee_carter or catch updates on her website.

Friday, March 22nd – Jordan Dane and In The Arms of Stone Angels: