Hi guys! Today, we have a promo stop for the Samantha project by Stephanie Karpinske.  This tour is organized by ATOMR tours. 🙂

Check out the blurb below with the excerpt and don’t forget to enter GIVEAWAY! 🙂 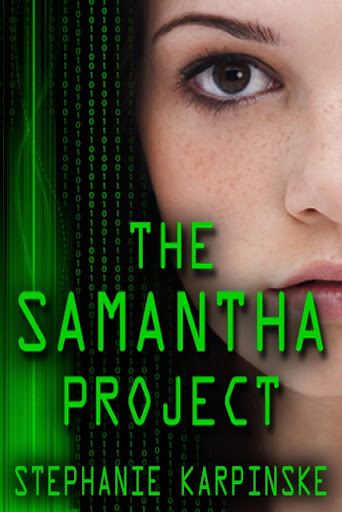 Seventeen-year-old Samantha Andrews has a seemingly perfect life; great parents, earlyadmission to Stanford, and a boyfriend who just happens to be the hottest guy in school. But adark secret from her past turns her world upside down. Sam discovers she’s part of a globalcorporation’s genetic enhancement project. And just as she’s learning what these enhanced genescan do, the corporation decides they want her, and the technology inside her, back!
During a heart-pounding race to flee from her pursuers, she encounters another person who waspart of the experimental project. He’s tall, blond, tan and completely irresistible! And he can readher thoughts!! Together, they’re both in danger and a rogue scientist discovers yet another secretlies inside them.

“I heard you were going to the dance. That’s a first.” I looked up to find Caitlyn Morgan staringdown at me, her eyes barely visible behind the bright blond hair that was always falling on her
face. Her short cheerleading skirt showed off her fake tan, which looked orange in the
fluorescent lighting of the cafeteria.

“I’ll be there,” I muttered, keeping my eyes on my book.

“You don’t have to go, you know. Colin would be fine going on his own. Caitlyn can keep himcompany.” This time it was Stacey talking, twisting her dark brown hair around her finger as shetalked. She also wore a cheerleader uniform and had the same orange glow as Caitlyn. They must
have gone to the same tanning place.

“I’m sure he would love that,” I said, “if he loved brainless cheerleaders whose only goal in life
is to get laid by the entire football team.”

I regretted saying it as soon the words came out. Caitlyn had a way of bringing out the worst in
me. I had never liked her, but then when she and Colin dated, I grew to hate her, even though Iknew that wasn’t a good reason to hate someone. After all, Colin had a part in the two of them
dating and I didn’t hate him.

I never understood what Colin was thinking dating her. Sure, it was years ago, but really?Caitlyn? He couldn’t have picked someone else? Anyone? I looked back to find Colin stillwaiting in line. What was taking him so long?

“You’re so jealous of us, Sam. It’s really pathetic,” Caitlyn said, sweeping her long hair out ofher face. “And in case you forgot, I’ve already had Colin. Maybe it’s time to take him back. I
only left him alone because I felt sorry for you and what a loser you are. But now that you’retechnically graduating in a few weeks, I think it’s time for some competition. What do you think,
Stacey?”

“Definitely. I love competition, especially when it involves Colin. Go Caitlyn!” Stacey did alittle mock cheer, waving some fake pompoms in the air.
I could feel my face heating up but didn’t want to give them the satisfaction that they weregetting to me. “Well, good luck with that.”

“It’s like you always say, Sam. A girl’s gotta have goals.” She straightened up to stick her chest
out as she looked behind me. “And here he comes now. Hi, Colin. You look really hot today. Ilove that shirt.”

Caitlyn walked past him, brushing her chest on his arm as she turned. Stacey followed close
behind. I felt sick, remembering why I wanted to graduate early.

GIVEAWAY TIME!
Win an ecopy of the Samantha project (INT)

Cover Reveal: Out of Play by Nyrae Dawn and Jolene Perry