Monday Moonings is a weekly meme here on my blog featuring new books or authors, but mostly self-published authors. 🙂
Hi guys! Today’s spotlight is on Dented Cans, a novel by Heather Walsh. Check out the blurb below as well as an excerpt.
Enjoy! 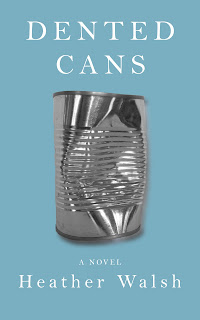 A family secret is revealed during an ill-fated—yet hilarious—trip to Disney World.
Sixteen-year-old Hannah Sampson knows her family is not what you would call normal. Her father compulsively buys dented cans and has a particular fondness for cans without labels, which are extremely discounted because their contents are a mystery. Her mother takes countless pictures of her family and then glues them down into the pages of her scrapbooks, but does not allow anyone to look at them. Ryan, Hannah’s mischievous fourteen-year-old brother, is headed straight for the remedial track at the local community college, if he’s lucky.  Ben, her eight-year-old brother, is a walking sound effects machine, who prefers to communicate with noises rather than words. While Hannah is focused on escaping her working-class Connecticut suburb, she also finds herself being tugged back home as she worries about her brother Ben.
Hannah’s parents inflict one last family vacation on the Sampson children, a trip that goes comically wrong almost from the get-go. Hannah is forced to confront her family’s past in Disney World, of all places, when an emotional argument prompts her parents to disclose a secret they have been keeping from the children for sixteen years. Ultimately, she must decide whether to leave her hometown and not look back, or to focus on helping her family.

EXCERPT
We did a few more rides, and then we went to the World Showcase, the section of EPCOT that consisted of pavilions “showcasing” various countries. In reality just a bunch of overpriced restaurants and gaudy gift shops “hawking” ethnic food and trinkets. Before we were allowed to eat lunch, we had to locate a restroom so we could rid our hands of the thousands of germs that only Dad had the ability to detect. Then we spread out across two benches in Italy right next to Alfredo’s Restaurant, where people who actually purchased their food went to eat. It was a good thing we’d brought our own peanut butter and jelly sandwiches. That and chicken fingers would have probably been a hard ethnic cuisine to place. Maybe the Nutritionally Defunct Pavilion?
Mom began passing out the sandwiches. I felt as if I shouldn’t eat mine, knowing the hard work that went into making it.
“This World Showcase is so boring,” Ryan said.
“This World Showcase is so stereotyped,” I said. “Who knew the only thing Italians do is listen to ‘O Solo Mio’ while they eat spaghetti and meatballs? And if you’re German, you obviously dance the polka. Half of it isn’t even true.”
“Yeah, I didn’t know that Mexicans just hit piñatas all day. And you can buy your own to whack for just 19.99,” Ryan said.
“Hannah, stop questioning everything. Just try to enjoy it,” Dad said.
Stop questioning everything. I think Dad was just quoting Socrates there. Didn’t he say that? My fellow Greeks, stop questioning everything. Just enjoy. Enjoy EPCOT.
“OK, I won’t point out that Africa, the second largest continent on the planet, isn’t even represented here,” I said.
“We’ve heard enough of your opinion on the matter. Can you please just let your younger brother enjoy this?” Dad said.
Sure. I could keep the truth to myself. Socrates and I were kindred spirits. Perhaps Dad had some hemlock for me to drink?
“Did you bring any canned peaches for dessert?” Ryan said.
I laughed.
“OK, very funny,” Dad said.
Please like & share: