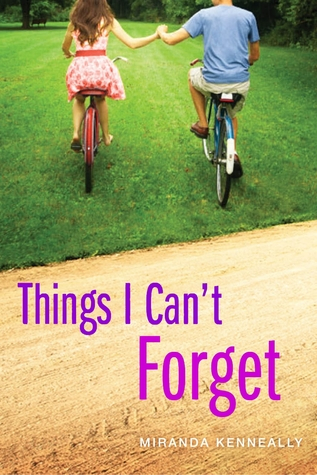 Title: Things I Can’t Forget
Author: Miranda Kenneally
Publisher: Sourcebooks
Expected Publication:
Source: e-ARC from publisher via netgalley
Note: Mature themes, sexual situations, religious discussions.
Companion to Catching Jordan and Stealing Parker.
Kate has always been the good girl. Too good, according to some people at school—although they have no idea the guilty secret she carries. But this summer, everything is different…
This summer she’s a counselor at Cumberland Creek summer camp, and she wants to put the past behind her. This summer Matt is back as a counselor too. He’s the first guy she ever kissed, and he’s gone from a geeky songwriter who loved The Hardy Boys to a buff lifeguard who loves to flirt…with her.
Kate used to think the world was black and white, right and wrong. Turns out, life isn’t that easy…
My Thoughts:
What I really love about Miranda Kenneally’s novels are her varied themes per book, and each female protagonist character is different from the last one. Catching Jordan has Jordan Woods, a female football player, relaying her inner thoughts through her journal, as she struggles with her love life, friendship and future career choice. Stealing Parker is about Parker Shelton, a baseball player, whose church and so-called friends turned against her when her mom came out as a lesbian. We glimpse of her inner thoughts through her written prayers which she burns after writing them. And here in Things I Can’t Forget, whilst the title does not include the MC’s name, but the pattern is still there. We meet Kate Kelly, a former soccer player, who is now on a summer job as a counselor in a Christian camp.
Kate is a good Christian girl whose faith wavered when she helped her bestfriend commit abortion. Hoping to receive a sign from God while in camp, she met her old camper friend Matt. They sparked and connected. Through Matt, she experienced things she never experienced before. Things drove her to confusion on what’s right or wrong, what to do or what not to do. Things I Can’t Forget is not only about Kate, but also about Matt who has been broken but is still willing to get up and try again. This novel is not just about faith in God but also faith in hope, in life, in forgiveness and in moving forward from things you can’t forget.
I liked Kate, I empathized with her naiveness at times. I remember my teenage self in her. She questioned things and can’t help but judge others because they defile the things she learned while growing up. One thing I agreed with her in the end is that you can’t really judge a person but only God can, in the end it’s between God and the person. I like Kate more when in the end she chose to right her wrongs and stuck up with her beliefs. What struck me the most in Things I Can’t Forget is the lesson on respecting others’ beliefs, because everyone has their own, and imposing your beliefs to them will just lead them far from you. Another character I liked is Matt. I love how he balances his social life and faith. I am sort of like him, I don’t judge my friends but I also won’t go so far as to compromise my faith. Kate and Matt’s relationship development was natural and they just connected. I like the story of how God brought them to each other, it was sweet and romantic.
Miranda Kenneally again delivers a relatable and very much engaging read to all readers, to everyone actually. I didn’t feel any prejudice or any preachy thoughts in the novel. It’s a good and touching story.