Monday Moonings is a weekly meme here on my blog featuring new books or authors, but mostly self-published authors. 🙂
Hi everyone! first monday of the year is here, and opening this week’s series of posts is a feature on Starlet’s Web (the Starlet Series) by Carla J. Hanna 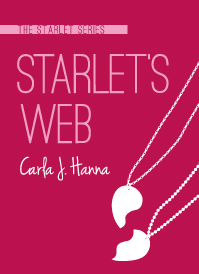 A-list actress, 17-year-old Liana Marie Michael struggles to find herself
when Hollywood’s obsession with youth and power threatens to destroy her
future.
Liana is dating Hollywood’s hottest heartthrob while filming her seventh
motion picture with sexy co-star Byron. With her film soon to wrap, her acting
contracts up for renewal, her high school graduation looming and growing
tension between her and smart, religious jock, Manuel, life feels overwhelming.
Will Lia find the courage to share her love for Manuel? In the eternal quest
for youth, what life-shattering secrets has Lia’s mom been keeping from her?
Can Manuel accept Lia’s role in Hollywood’s web of lies?
STARLET’S WEB is not only a love story. With fast-paced narrative that
reflects Hollywood’s hyper-drive lifestyle, Ms. Hanna transports the reader
into an actor’s daily life and demonstrates how difficult it is for young
adults to break free from a path created by someone else – even when it is a
successful one.

“I survived Hollywood by focusing on long-term goals. I had rules that I followed so I wouldn’t become a whore like an overextended young star. I stopped drinking. I didn’t do drugs. I didn’t party or sleep around. I was not going to be some guy’s doormat. I worked hard. I wanted to be trustworthy, honest, loving, and free when I was old enough to get married to an honest, loving, wonderful man who would never leave me or our beautiful children. That’s what I wanted. Evan was honest. Manuel was honest. But I was seventeen so I couldn’t exactly get married yet.”

The excerpt had me curious and interested on the book. I think I’m going to take a chance on it. 🙂