Monday Moonings is a weekly meme here on my blog featuring new books or authors, but mostly self-published authors. 🙂
Hi guys! Today’s spotlight is on author Heather James and her book called “Fire”, The first in her Elements of Power series. Below that, we have an excerpt from her novel, generously shared by the author.  Hope you’d check it out. 🙂 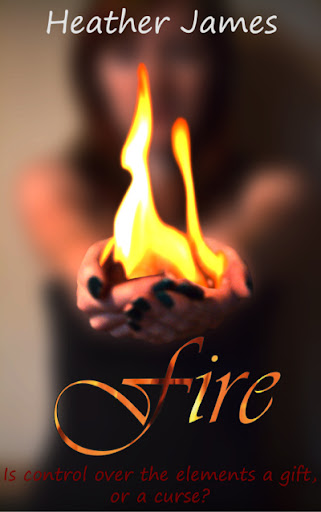 Is control over the elements a gift, or a curse?

Roxy thinks that she is in control of everything: with flames flaring at her fingertips and an equally fiery attitude, what more could she need? But then she meets Brae, a prince from a rival Realm, who turns her assumptions of superiority upside down.

Jasmine has none of Roxy’s confidence or intensity. But she does have a secret – and Brae – and she’s not going to give either up willingly.

Fire is a self published, young-adult, fantasy novel, based around the four classical elements: fire, water, earth and air. The story is split between two female protagonists: Roxy, a fiery Helian with a fierce sense of independence, and Jasmine, an Arcan orphan struggling to keep terrifying changes hidden from those she loves.
When Roxy’s grandfather invites delegates from the other three world Realms to the Helian Realm for a summit, the two girls’ lives collide. Neither will view their world in the same way again.