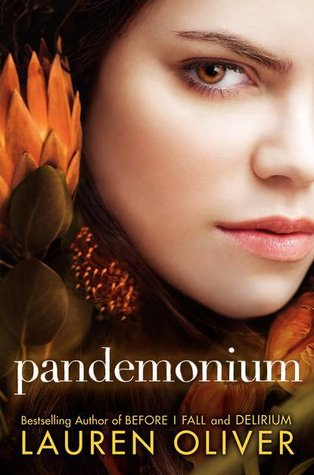 Lena joins the resistance effort against the oppressive government and fights for freedom.After escaping from Portland, Lena makes it to the Wilds and becomes part of an Invalid community. Weak and grieving for Alex, Lena fights to survive. And then she fights her oppressors.As the viewpoint shifts between Lena’s time in the Wilds and the present day, which is set in Brooklyn, Lena transforms into a warrior for the resistance. In New York City, the grass-roots movement for a Deliria-Free America (the DFA) is gathering strength, and its leader, Thomas Fineman, recruits more supporters by the day. His son Julian–as-yet uncured–heads up the DFA’s youth organization. Lena is tasked with blending into the DFA’s rallies; she seems to be a supporter yet she is really a spy. (Goodreads)

My Thoughts:
That ending! Whoa. Whoa.
I forgot how much excitement and adrenaline dystopian books give me. It’s an absolute awesome read! Alternately reading from the “then” and “now”. Lena’s survival journey was a difficult and dangerous one. It’s something exciting to read but I won’t wish it on anyone. The society they are on in itself is a horror. But here in Pandemonium, in the midst of an aftershock of losing everyone she cared about, the people she loved: Grace, Hana, Alex. Somehow Lena was able to move on, tried to in the beginning. She has new family now, a group of Invalids who took care of her and nursed her back to nealth. Later on, she’s officially a member of the resistance, and she’s a girl on a mission.
The new characters astounded me. Raven is an independent and a leader in every way: strict and organized, but amidst that she still has a heart. I like her strong character, and her role in the story is very crucial and without her, Lena wouldn’t be fighting for life. Then there’s Julian. There’s only one thing you need to know about him: i like him a lot, for Lena. *squeals*. I don’t know but I always have these instincts, both in real life and in reading books. I just seem to know the right people to like even just by reading a few sentences about them in the beginning of the book. And I can say I felt it with Julian. I already liked him and knew he was going to play a major role in Lena’s life. It was like Alex did not exist for me, haha. But maybe it has something to do with him missing for the most part of the book 🙂
The twists and adventure in Pandemonium can be described as the title’s namesake: pandemonium. Everything was a swirl of riot, victory, loss, fighting for survival. Everywhere you look, you’ll see a fight, trust issues, and everything ends up with virtues and moralities.
The ending left me hanging, absolutely hanging. I sort of saw that one coming but still reading it brought a screaming fit from my mouth. 🙂 can’t wait for Requiem!