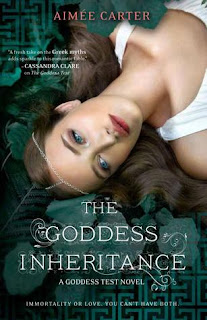 Love or life.
Henry or their child.
The end of her family or the end of the world.
Kate must choose.

During nine months of captivity, Kate Winters has survived a jealous goddess, a vengeful Titan and a pregnancy she never asked for. Now the Queen of the Gods wants her unborn child, and Kate can’t stop her–until Cronus offers a deal.

In exchange for her loyalty and devotion, the King of the Titans will spare humanity and let Kate keep her child. Yet even if Kate agrees, he’ll destroy Henry, her mother and the rest of the council. And if she refuses, Cronus will tear the world apart until every last god and mortal is dead.

With the fate of everyone she loves resting on her shoulders, Kate must do the impossible: find a way to defeat the most powerful being in existence, even if it costs her everything.

Even if it costs her eternity.

I love this series, and I hated to see it end. But I was also happy and satisfied with how things ended. My love for the series is not biased by how I like the author (met her last year, and she’s really kind and sweet). Anyway, what I like about the series in general is how it is based on Greek mythology, and boy I just like how complicated their stories were, and how Aimee Carter was able to successfully project a contemporary version of the main gods and goddesses in the Greek myth? it was awesome, and I just love reading fiction like this. Right amount of drama, wittiness, romance and action. Though the action part mostly involves magic and less of the physical hand to hand combat.

Goddess Inheritance picked off where Goddess Interrupted ended. Kate is pregnant and is about to give birth. The previously unknown villain is now widely exposed, and everyone knows who the bad guys are, and then there’s Cronus. The round about of the events that transpired in the novel, mainly consisting of the war, is really engaging to read. I never even noticed how far off into the novel I was until I checked on what page I was reading. There’s the usual back and forth motion of who’s winning, but it’s mostly Cronus, and losing, which is the other team. However, what I liked about the series is how the tragic moments are told in a non-traumatic way. For example, millions of people died, there’s sadness and the scene is described, but the sadness doesn’t fully evolve into depression, like some other books do, instead it just ends there. I don’t know how to describe it but that’s the idea. The whole story, not just that part, was made light in a way that it’s not heavily depressing, but all the while still alluring.

Then there’re my favorite characters: Kate and Henry. Seriously guys, I love them. There’s just something about the both of them that appeals to me. Overall, the story’s plot, twists and tone and everything are great. 🙂 I will surely reread this series in the future.

NOBODY [by Jennifer Lynn Barnes] Review and Giveaway