Monday Moonings is a weekly meme here on my blog featuring new books or authors, mostly self-published authors. 🙂
Today, we have new author Paul Rimmasch with us, with his book “The Lost Stones”. Paul also gave us an excerpt to read.  enjoy! 🙂 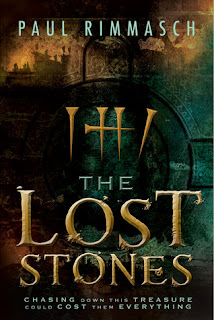 1600s Mexico- The Aztec Prince Ixtililxochitl writes that the first people to inhabit his land came from the Tower of Babel at the dividing of tongues…Scholars dismiss his writings as myth.—–

1800s Mid Western United States- Settlers dig into ancient burial mounds and discover thousands of slate tablets covered with a strange hieroglyphic writing and drawings depicting Jesus Christ…these artifacts are denounced as a hoax.
—–
1909 Arizona-a newspaper runs a story describing how a cave containing metal artifacts and Egyptian-type hieroglyphics was discovered in the Grand Canyon by a group of Scientists from the Smithsonian Institute…the Smithsonian categorically denies the account.
—–

These and other amazing facts make up the world of forbidden Book of Mormon Archaeology. It is a world BYU student and Iraqi War veteran Ammon Rogers never knew existed.  He is thrust headlong into this world when he asks the enigmatic adventurer John Byrd a simple question.  When John is kidnapped in Mexico, Ammon joins forces with John’s beautiful daughter in a desperate attempt to not only save John, but to find his answer…an answer that will change the world…an answer one sinister foe will do anything to suppress.