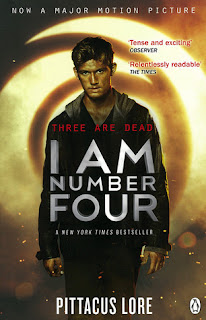 Nine of us came here. We look like you. We talk like you. We live among you. But we are not you. We can do things you dream of doing. We have powers you dream of having. We are stronger and faster than anything you have ever seen. We are the superheroes you worship in movies and comic books – but we are real.Our plan was to grow, and train, and become strong, and become one, and fight them. But they found us and started hunting us first. Now all of us are running. Spending our lives in shadows, in places where no one would look, blending in. We have lived among you without you knowing.But they know.They caught Number One in Malaysia.Number Two in England.And Number Three in Kenya.They killed them all.I am Number Four.I am next.

As part of my October Reading Challenge, I finally was able to read I Am Number Four. It was one of those books stuck on my bookshelf for more than a year already, and I just had to push myself to read them. And boy I wasn’t disappointed.

It also helped that I watched the movie more than a year ago already, and as far as I can remember there are lots of differences, but I totally understand (from the movie’s perspective). Production is hard, and in making movies, you have to change things in order to adjust to production budgets and the time limit, etc. Anyway, I need to focus on the book. The idea of other planets existing and far advanced than Earth doesn’t in any way make me happy. I have a very competitive spirit. Lol. But the book was actually good. I love how the action greeted me on the very first page. Plus, reading from Four’s perspective ( I mean John, but it’s not his real name really and I’m much more comfortable with “Four” because it makes sense more..) is real good. I love reading from guy’s POVs once in a while, it’s kind of refreshing, especially since I’m a girl and I’m living a girl’s life. haha.
The way the story unfolded was in no way irritating, like too much kept secret and all those crap, but instead Pittacus Lore told the story in a slow build-up, and even if the action scenes by the end of the book were thrilling and really full of suspense, but there was a little hanging build-up before the big explosion of action rounded up. But the wait was worth it. There were no butterflies-in-the-stomach kind of romance there, I actually felt it was put in there to satiate the romance department that is required in every book, but I didn’t feel it between Sarah and Four (John). Maybe they’re not meant to be. (spoiler alert: this has something to do about what Henri told Four that the love Loriens felt for another Lorien is monogamous and forever, and for Loriens and humans- you can’t be to sure). Anyhoo, I hated when one important character died in the end. I cried a little there. It was just sad.
Overall, the book was better than I expected. I honestly want to read Power of Six right now, but I have a list of books to read to follow, but I’ll read it as soon as I can. 😉