hi guys! today, we are having a tour stop from the Viper’s Creed blog tour. We have a guest post from TL Shreffler entitled “First Crush”. Enjoy reading the rest of the post! 🙂 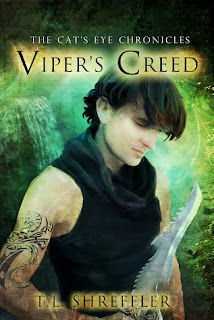 Sora is having visions. Strange, terrifying visions brought on by her Cat’s Eye necklace, an ancient and magical device. Spurred to action, she leaves her mother’s cabin to find Crash, the mysterious assassin who once changed her life. She is certain that together, they can discover what the necklace is trying to tell her.
Crash is still on the run from the dark sorcerer, Volcrian, but now a plague is spreading across the land. Volcrian’s quest for vengeance has awakened something far more evil than himself; a force that could destroy the entire kingdom. Together, he and Sora must harness the power of the Cat’s Eye and kill the sorcerer before it’s too late….

He was my fencing teacher. I was a shy, freckly 12 year old, and he was a handsome, roguish-looking man, probably about 26. We had private lessons three times a week. I remember rushing home after school (7th grade), getting fencing gear, and sitting impatiently by the door, counting down the minutes to my lesson.

I would fall asleep at night imagining pirate ships, epic sword fights and Orion’s muddy, greenish eyes. I imagined a million times how we would run away together. I’d grow up to be a tall, athletic, feisty redhead (unimaginably beautiful, but completely oblivious to my good looks, of course.) At the very-grown-up age of 18, he would come to my birthday party, armed with a glistening silver rapier, and confess his undying love. Or, better yet, we would run into each other just outside the fencing studio. It would be late at night, and there would be an evil, bloodthirsty criminal trying to mug me. Then Orion would appear, dressed in full fencing regalia, and deter the robber with an elegant twirl of his sword. He would take me back to his one-bedroom apartment (romantically located above a run down antique shop), bandage my sprained ankle, and gift me with my very first kiss.

Alas, it was not meant to be! I learned to lunge, parry, repost, intercept, and eventually defeat him 2 out of 3 fights. He announced that I was too skilled to continue working with him, so I moved on to a new teacher, Mr. West, who was 40-something, balding, and much less romantic.

Needless to say, I quit fencing soon after. But a lot of that crush found its way into my YA Fantasy series, The Cat’s Eye Chronicles. Amazing what pent up hormones can do!
Please like & share: