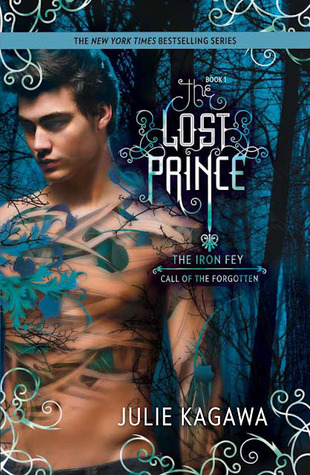 Don’t look at Them. Never let Them know you can see Them.
That is Ethan Chase’s unbreakable rule. Until the fey he avoids at all costs—including his reputation—begin to disappear, and Ethan is attacked. Now he must change the rules to protect his family. To save a girl he never thought he’s dare to fall for.
Ethan thought he had protected himself from his older sister’s world—the land of Faery. His previous time in the Iron Realm left him with nothing but fear and disgust for the world Meghan Chase has made her home, a land of myths and talking cats, of magic and seductive enemies. But when destiny comes for Ethan, there is no escape from a danger long, long forgotten.
My name is Ethan Chase, and I may not live to see my eighteenth birthday.

My Thoughts:
I knew it Julie Kagawa will never fail me. This new series, a spinoff from the Iron Fey series, is an absolute new favorite.
The male POV did not disappoint, especially when it’s from Ethan! Ever since the Iron King, Ethan became one of my fave characters. Back then he was just a small, frightened, adorable boy. And now he’s all grown up. I loved the idea that another story came up from the series. I like it that Wthan’s story did not end there. Ever since that last book, his sister, the Iron Queen, Meghan, visited only a couple of times until she never did anymore. Since then, Ethan was on his own trying to dodge the faeries as they perform lots of pranks on him, thereby elliciting a bad boy image on his part. And having no friends does not bother him at all, because they will only be endangered once they hang out with him. I totally understood where he’s coming from. And that just made me love him more!
Reading the Lost Prince brought back many memories (even if I read the IRON knight only late last year). Anyway, it felt so many years ago. Meeting Ethan, Kierran, as well as Kenzie (Ethan’s love interest) and Annwyl (kierran’s love int). Plus seeing (yes, really, i’ll use that term,lol) Meghan, Ash and Puck! Aaaah. I was just so happy! My gosh. There were so many hidden surprises and revelations in this novel. Some will really shock you (it shocked me), and some will either frustrate or interest you.
I knew from the beginning (I have this hunches that tend to be correct) what the secret Kenzie is hiding is (No, she’s not fey or anything fey-related, geez you guys! Lol). And I have a guess on what Ash and Meghan and the other fey monarchs are hiding, that will surely be revealed on the next books. Meanwhile, this new problem, the stealing-glamour Feys are just starting, I just know it, and Kierran has a very big part on it. And I hate to say it but I know he’s a ticking time bomb, just waiting to explode, once he makes taphat terrible choice. I just hope it won’t happen. sigh.
Anyway, I’ll leave you guys with this thought. If you’re a fan of the Iron series, read this already! 🙂 the writing, the prose, the story, they don’t disappoint.

Book Review: 52 Reasons To Hate My Father by Jessica Brody