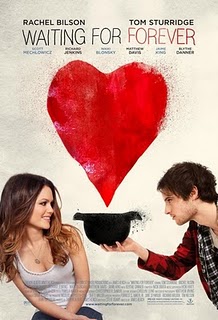 STARRING: TOM STURRIDGE and RACHEL BILSON
I’ve been literally waiting for forever for this movie! First off, I like Tom Sturridge, and when I learned that he got this part in this movie, I started waiting,..and that was like back in 2008. Flash forward, this film hit festivals on 2010, and was shown in theaters FEBRUARY 2011. To add up to my frustration, it wasn’t shown in our theaters! So, I downloaded it. And NOW, I just finished it! and it was GREAT! worth the wait? you may ask. It definitely was!
SYNOPSIS:
Who decides what is normal? A unique love story about friendship and a view of the world from different perspectives, WAITING FOR FOREVER explores the connections people make in the face of life’s changes. Best friends while they were growing up, Emma (Rachel Bilson) and Will (Tom Sturridge) lost touch a long time ago—as far as she knows. To Will, Emma never stopped being the most important person in his life. Believing them to be forever linked, he goes wherever she goes. Will doesn’t have a home, a car, or a “real” job. He survives on his talent as a juggler and entertainer—talents honed through years of showing off for Emma. When her father gets sick, Emma returns to their hometown, trying to leave behind her complicated love life and failing career as a TV actress. As its characters face love, death and their own preconceptions, WAITING FOR FOREVER questions the realities of life.
WHAT I THINK:
I smiled, I cringed, I cried, I was surprised, cried more, horrified! (yes, there was a point), suspense on what’ll happen next killed me! The movie was not what I thought it was. I thought the “different perspective” was just a normal different kind of different perspective,lol, boy, was I wrong? I was super surprised (and horrified) of what Will’s brother Jim thought of Will, said he was crazy. Much more shocked to know he’s kinda stalking Emma. So, anyway, Will’s a great guy, actually. He just doesn’t see the world as what most people have. It’s like his perspective wasn’t influenced by people around him-he was so innocent, it was adorable! However, it also freaks me out that he doesn’t have any idea with some important things in life,.well, because he revolves around Emma. Emma, on the other side is a normal girl, you can say, who’s a TV actress (failing) and what I love about her is that she is thoughtful when it comes to her family…she just went wrong when she cheated on her BF. But if you ask me, it turned out helpful, because Aaron’s real attitude came out due to this circumstance..
I cried…okay, I cried a LOT! Especially when they talked on the park, and Emma knew Will was stalking her, and realized how different he was. I was super hurt! Tom Sturridge really did a great job on this! He was so emotional and he really brought out his character (innocent though serious). Plus, when he was so lost and was suspected of murder. And here it goes, I cried a LOT when his brother got him! And on the car…gosh! I really got emotional there cuz it was just so touching…
Well, at that point in time, I thought he was going to a mental hospital already, or better (because I know he realized how fool he became) he became rich and had a job, lol. Well, since Emma broke up w/Aaron because she chose to stay and take care of her dad..So after her dad died and after so many months ( I guess), she received a letter from Will, and this made her look for him. Now this is where it gets thrilling, I personally didn’t know if Will was dead, or gone rich ( I just debated between the two), but I didn’t expect that he was still him! but of course, with a changed perspective in life..and so they met again.
The ending was nice. cliche but spontaneous. The audience gets to decide if they’re going to be together, but the ending suggest the latter. I like Will’s last line “Are you stalking me?”. brilliant!
I hope Tom gets a lot of projects after this because he really was good! I mean, really good!(: Rachel was okay too.
I was wrong about the story. You may think its the usual childhood sweethearts, meet again, fall in love,etc. BUT NO, it’s actually different! YOu’ll know what I’m talking about if you go watch it!
5 STARS!
Please like & share: