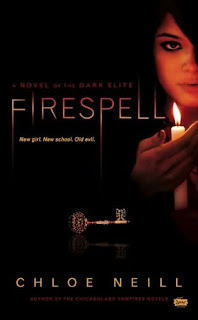 FIRESPELL.
the STORY:
As the new girl at the elite St. Sophia’s boarding school, Lily Parker thinks her classmates are the most monstrous things she’ll have to face…

When Lily’s guardians decided to send her away to a fancy boarding school in Chicago, she was shocked. So was St. Sophia’s. Lily’s ultra-rich brat pack classmates think Lily should be the punchline to every joke, and on top of that, she’s hearing strange noises and seeing bizarre things in the shadows of the creepy building.

The only thing keeping her sane is her roommate, Scout, but even Scout’s a little weird—she keeps disappearing late at night and won’t tell Lily where she’s been. But when a prank leaves Lily trapped in the catacombs beneath the school, Lily finds Scout running from a real monster.

Scout’s a member of a splinter group of rebel teens with unique magical talents, who’ve sworn to protect the city against demons, vampires, and Reapers, magic users who’ve been corrupted by their power. And when Lily finds herself in the line of a firespell, Scout tells her the truth about her secret life, even though Lily has no powers of her own—at least none that she’s discovered yet…

WHAT I THINK:
Private schools=Gossip Girl? Well, not for this one. I actually think Chloe Neill did an excellent job. Quite original characters, unique blending of various and diverse supernatural characters. Fast paced, lots of action, and lots of heart-stopping moments…well maybe not that lot. Still. I love stories involving boarding schools and such, even had their own centennial keys!. The only problem I had with reading this was imagining the too complicated school they had! I can’t really imagine how many hallways and passages we’ve gone through (as if I’m actually there). However, I love the characters: Scouts’ truthfulness and Lily’s sarcasm. The setting was just too short that it makes it impossible to believe all of it happened in less than two weeks! But, that’s fiction! (: The brat packs. you might actually think they have some depth in their characters, but for the first book they were just some distractions. The real action is underground..the basement. the tunnels. Isn’t it where all the action is? Made me feel like I’m in HP again..yes, the chamber of secrets. plus you can add up the uniform thing complete with the tie,button up shirts,sweaters,etc. The book also acquainted me to Chicago, since Lily’s new to the place like I am.
I like how the first installment built a great foundation on the story. I can guess this series will gain popularity too and has set itself to the hearts of its readers, it got to me!
Please like & share:

My Name is Memory: my 1st fanvid!